Home > About > Our People > John Hewson 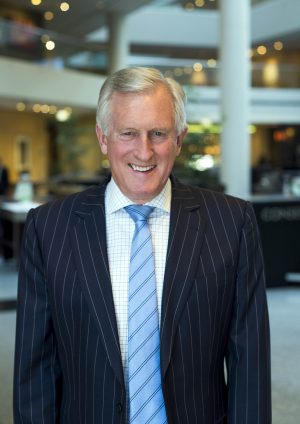 Dr John Hewson is an economic and financial expert with experience in academia, business, government, media and the financial system. He has worked as an economist for the Australian Treasury, the Reserve Bank, the International Monetary Fund and as an advisor to two successive Federal Treasurers and the Prime Minister.

He is currently a Professor and holds a Chair in the Tax and Transfer Policy Institute at Crawford School, ANU.

His business career before entering politics in 1987 was as a company director and business consultant and included roles as Foundation Executive Director, Macquarie Bank Limited and as a Trustee of the IBM Superannuation Fund.

John’s political career included seven years as a ministerial advisor and a further eight years as the Federal Member for Wentworth in the Federal Parliament. He was Shadow Finance Minister, Shadow Treasurer and Shadow Minister for Industry and Commerce, then Leader of the Liberal Party and Federal Coalition in Opposition for four years.

Since leaving politics Dr Hewson has been Chairman/Director of a host of public and private companies across a range of industries, including as Chairman of ABN Amro Australia, Chaired two charities and a number of other not-for-profits. He also writes and comments widely across all media.

Dr Hewson has a long involvement with the issue of climate change and presently Chairs the Asset Owners Disclosure Project that surveys, rates and ranks the world’s largest asset owners in terms of their management of climate risk.