Does private schooling pay? Evidence and equity implications for Australia 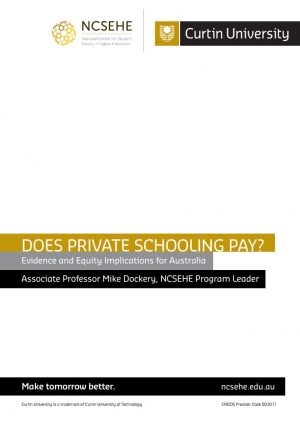 How effectively different schools prepare young people for future social and economic engagement has important implications for education practice, funding allocations and social equity, as well as for parental decision making. This paper uses data from waves 2001-2014 of the Household, Income and Labour Dynamics in Australia Survey to analyse the returns to having attended a Catholic or Independent private school as opposed to a government school. Based on wage equations estimated by random-effects panel models, Australians who attended Catholic schools are observed to enjoy an hourly wage premium of around 10 per cent, and other private schools a premium of around 15 per cent relative to those who went to a government school. Just over half of this premium can be accounted for by the greater level of educational attainment students ultimately achieve in the case of Catholic schools; and around three-quarters in the case of private schools. Cohort analysis shows these premiums have remained relatively stable over time, despite rising levels of Year 12 completion and higher education participation. Overall the results suggest that private schooling continues to be an important mechanism by which socio-economic advantage is transmitted between Australian generations, largely due to enhanced access to higher education. The extent to which this is a ‘causal’ effect of differential school quality remains contentious.