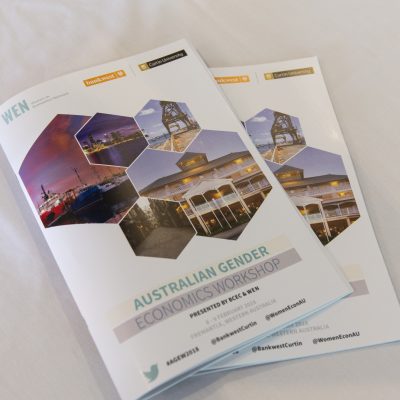 BCEC together with the Economic Society of Australia’s Women in Economics Network (WEN) were excited to host the first Australian Gender Economics Workshop (AGEW) in Fremantle on Thursday 8 and Friday 9 February.

To view presentations from the Workshop, download the AGEW 2018 Program.

AGEW 2018, the first gender economics workshop of its kind in Australia, combined BCEC’s commitment to deliver research that contributes to the economic and social wellbeing of Australians, and WEN’s mission to advocate for and promote women in economics.

The workshop provided researchers with a forum to present and discuss innovative research incorporating gender analysis into all areas of economics.

We were delighted to receive such strong interest in the workshop from researchers working across a wide spectrum of gender economics topics.

Workshop participants were fortunate to hear from Noongar Elder Marie Taylor who delivered a warm welcome to country in both Noongar and English, and spoke about the matrilineal Noongar culture and the importance of gender equality.

The workshop was officially opened by Curtin Vice-Chancellor, Professor Deborah Terry AO, who acknowledged the importance of the workshop in tackling gender inequality and driving good public policy.

“Gender equity is a challenge that essentially cuts across all critical policy areas. These are issues that go to the heart of fairness and equity in our society, but they also have very significant economic implications.” – Professor Deborah Terry AO, Curtin Vice-Chancellor

Keynote presentations were delivered by Professor Alison Booth (Australian National University) and Associate Professor Betsey Stevenson (University of Michigan), both of whom have made invaluable contributions to the knowledge base that informs our understanding of gender inequality and how to address it.

Professor Alison Booth delivered a compelling keynote, sharing her extensive research and expertise on competitive behaviour in economics and broached the question – How different are men and women really?

Professor Booth shared her research on gender differences in both choosing to compete and competitive outcomes, with evidence drawn from several innovative studies including the behaviour of secondary school students in single and co-ed schools in the UK, differences in competitive behaviour of birth cohorts in China and Taiwan, and a study of competition outcomes in Japanese speedboat racing.

A key overall conclusion from the three studies was that choosing to compete, or willingness to compete is malleable.

“Women tend to avoid competing against men but this tendency is less pronounced for those who have been educated in an environment in which women’s value is upheld.” – Professor Alison Booth, Australian National University

Associate Professor Betsey Stevenson delivered a timely and powerful keynote on the under-representation of women in economics and the stalled pipeline that exists across the globe.

Associate Professor Stevenson’s innovative study on how gender is portrayed across best-selling introductory economics textbooks found that men make up three-quarters of the fictional people in economic textbook case studies. And where women were found in examples, they were typically involved in education or household tasks and were more likely to be passive rather than active participants in economic decision making.

Associate Professor Stevenson raised the importance of involving more women in economics, particularly as they tend to have different views around redistributive policies and government intervention in markets.

The workshop also included the inaugural Best Student Paper Award, which was won by Ruth Badru (University of Otago) and awarded by Professor Siobhan Austen (Curtin University). Ruth’s paper examines the effect of gender wage gaps and women’s bargaining power on aggregate demand, and is an important contribution to the evidence base needed for the formulation of inclusive macroeconomic policies.

The workshop culminated with a Policy Symposium on Friday afternoon, which brought together senior influencers from government, research, industry and not-for-profit communities.

The symposium drew on research insights and key themes stemming from the workshop, helping to actively shape policies to enhance the status of women across the full spectrum of economic and social outcomes.

AGEW Symposium panellists raised the importance of normalising parental leave in the workplace as one of the key policy elements needed to overcome gender disparities.

The panel also discussed the importance of challenging gendered roles in workplaces and society more broadly, along with reflecting on the value of women in driving gender inequality and the need for a cultural shift.

“The reason we see so much inequality is because it comes down to the value of women in society… there’s a culture that we need to shift and it has to come through the education system, through families and our communities” – Associate Professor Rebecca Cassells , BCEC

Both the workshop and policy symposium offered an important opportunity for all participants to connect to this wider community of economic researchers, policy analysts and experts within Australia, who all share a common goal to better understand and tackle the issue of gender inequality.